Altdorf: Crown of the Empire is a fascinating and entertaining 224-page guidebook to the capital. Standing on the confluence of two of the greatest rivers in the Empire, Altdorf is a nexus of power: government, religion, magic, and military. Each district is carefully detailed with a wide variety of locations, plot hooks, and NPCs. A beautifully illustrated map—including both GM and player versions—shows off the expansive city in exquisite detail.

Altdorf: Crown of the Empire is extensively researched, combining details derived from over 30 years, including stories, sourcebooks, and roleplaying scenarios, with new material to create the ultimate sourcebook for thrilling adventures in the capital. 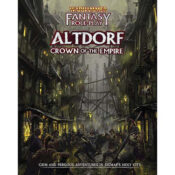 Altdorf: Crown of the Empire includes:

Warhammer Age of Sigmar: Soulbound — Shadows in the Mist

Venture into the deadly mist-shrouded streets of Anvilgard in the first ever campaign for Warhammer Age of Sigmar: Soulbound. Shadows in the Mist is a sprawling six-part campaign set within the free city of Anvilgard and sees a group of Soulbound heroes tasked with rooting out corruption in the city and exposing the mysterious Blackscale Coil—an organization made up of members of the Darkling Covens, Scourge Privateers, and other Aelven outcasts.

The Coil has used coercion, bribery, and violence to gain a stranglehold on the city. Even the Grand Conclave that is supposed to govern Anvilgard seems to have been infiltrated by the Coil, making it impossible to know whom to trust. But an even greater rot is growing in the heart of Anvilgard, one that could consume the city entirely if it is not stopped in time. 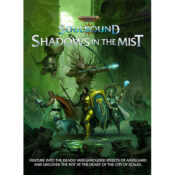 When menace looms, the best among us don’t flee danger—they face it. With might and powers beyond that of mere mortals, they stand before the forces of injustice with confidence. They leap into dark and daunting dangers. They slip the bonds of gravity and soar. They claim the sky itself!

In a world that could use a few heroes now more than ever, you can join their ranks. Claim the Sky takes the Cypher System into the realm of superheroes, with a hefty book chock full of rules, character options, genre advice, and a complete, ready-to-use setting that makes the most of the superhero genre. Whether creating your own heroes or playing your favorites from comics or movies, Claim the Sky makes you the hero.

Got customers looking for a new RPG? The Cypher System is a well-supported line that’s easy to learn and play (and sell!).

Grab the goodies or get stuck with the crumbs. Players are hungry critters, sneaking into the bakery in the middle of the night. Grab delicious baked treats from the rows in the center of the table. Swipe something enticing from another player. Collect the tastiest tableau of treats to win the game. 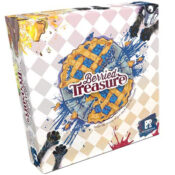 Berried Treasure is a whimsical reimagining of the 1992 classic, Buried Treasure, by the legendary Sid Sackson. Streamlined and refined, the game is as smooth as ever, featuring deliciously cheeky art by Heather Vaughan. Lightning fast and highly interactive, it’s perfect for game night, family night, or date night.

It just doesn’t feel like a dungeon worth exploring without hordes of undead! Munchkin Undead adds 15 more monsters, curses, and items all dealing with the formerly living. Get your pointy sticks and your chainsaws ready—because it’s time to kill them all over again!

What should you do if you have too many dice? (Well, that’s silly, because you can never have too many dice!) But what you could do is pick up this dice bag! This striking (and roomy) Cthulhu-themed dice bag will help you keep all those treasures right at your fingertips.

The drawstring bag is made of purple fabric, lined with black satin, and holds more than 100 assorted dice! This Cthulhu-adorned 6″ × 9″ bag will be a valuable addition to your next game day, no matter where you play! 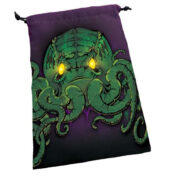 Key features: Includes a 19mm Cthulhu d6, translucent purple with green pips; has artwork on both sides; it’s a dice bag. You know what to do.

Back by popular demand! This second printing introduces brand new colors! If you know gamers, you know they love their dice. And because they love their dice, they love cool bags to carry their dice in. The Dice Dragon Dice Bag features a dragon who is just as much of a dice hoarder as you are! The Lar deSouza art will appeal to everyone, and the sturdy fabric bag holds over 100 dice… That should be enough for even the most avid collector! Includes two 16mm dice. 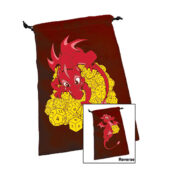 Key features: Lar deSouza’s art is a favorite of Munchkin players and has a lot of crossover appeal; in shades of red with a golden treasure of dice, this 6″ × 9″ bag is designed with black satin lining and a drawstring so it won’t come open halfway to game night; display it with your dice for one-stop shopping!

This is a new supplement for Frostgrave with expanded rules for vampires and giants, a new soldier type in the huge giant-blooded and guidelines and scenarios for playing with high-level wizards.

In the days of ancient Felstad, vampires kept to the shadows, their small numbers no match for the power of the city’s wizards. But when the cataclysm struck, the wizards were destroyed, while the deathless vampires went into a frozen hibernation. Now, as the city thaws, the masters of the night rise again, reoccupying their hidden strongholds, reforming their old cabals, and finding new victims to serve as their thralls. The destruction has granted the vampires another boon: giant’s blood. While giants used to live out of reach to the far north, they have since descended on the city in large numbers. Their blood is an elixir to the vampires, filling them with strength and magical power. A war is brewing between these two ancient races and, once again, the wizards of Frostgrave are caught in the middle. 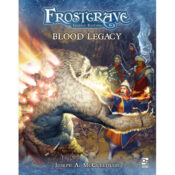 This supplement for Frostgrave: Fantasy Wargames in the Frozen City presents greatly expanded information on the vampires and the giants that occupy the frozen ruins, including rules for vampiric magic and a breakdown of the different tribes of giants. Also included are rules for a new type of soldier: the giant-blooded, descendants of the giant tribes and inheritors of some of their strength. Finally, the book contains a section on playing Frostgrave with high-level wizards and includes two mini-campaigns to challenge these experienced spellcasters.

This is a modular expansion for Undaunted: Normandy and Undaunted: North Africa that adds new content to both games, includes a solo mode by Dávid Turczi and David Digby, and adds a four-player mode that takes the Undaunted series to an unprecedented scale.

In North Africa, the Long Range Desert Group are a thorn in the sides of the Italian forces, disrupting vital lines of communication and striking at strategic targets ranging far and wide. In Normandy, U.S. forces brace against a German counterattack, determined to maintain their foothold in the region. The fighting is intense, and the outcome hangs on a knife-edge. With everything at stake, you desperately need reinforcements! 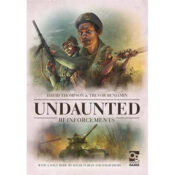 Undaunted: Reinforcements is a modular expansion that introduces a range of new rules, scenarios, and units. Unleash the might of the German and American tanks and see how your new squad options fare against them in Undaunted: Normandy, or make use of mines, assault aircraft, and other new units as you attempt to outfox your opponent in Undaunted: North Africa. Whether you have only one or the other, you’ll be able to play Undaunted for the first time in a four-player mode, or test your mettle in a solo mode by Dávid Turczi and David Digby.