Your favorite British baker, Kim-Joy, has moved to a magical forest and opened up a small bakery. Now she needs your help to keep customers happy. From sly foxes to needy cats, gossipy ducks to clumsy dinosaurs, you’re about to have your hands full keeping this bakery running smoothly! Kim-Joy’s Magic Bakery is a light, cooperative card game that tells an adorable story over 10 unique scenarios. No baking experience required! 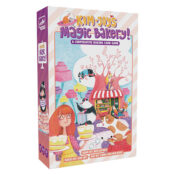 Roll Camera: The Filmmaking Board Game

You are urgently needed on set! You are movie producers in a failing film production company. You have one last chance to make a successful film—otherwise, the company will collapse and you’ll never work in this town again! You have to use the resources at your disposal to produce this film on time and under budget, ensure it’s of a high enough quality, and make some sense of the resulting story. No time to waste—Roll Camera! 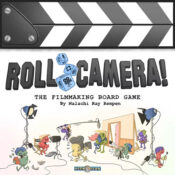 Roll Camera features highly thematic cooperative filmmaking, dice worker placement with a puzzly core, and colorful artwork with a humorous style. You’ll end the game with a “real” 5-part movie that you created, and you can play as the director, producer, cinematographer, or others.

Take a crazy race through Belgium and its breweries. Visit as many as you can, buy and taste their beers (in moderation) throughout the competition. Optimize your routes through the country by hitchhiking or biking, unless you prefer public transportation. Meet your opponents, and have a drink with them—but watch your blood alcohol level. Hangovers and other problems await you. 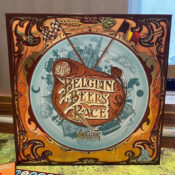 Gods and titans clash! Build your forces, control power from the land, and battle opponents for supremacy. Take on the role of a powerful god stranded in a new and hostile world. Facing off against rival gods, you must do battle by commanding armies and warriors, all with the purpose of becoming the first to claim the Elements of Fire, Wind, Earth and Water and create the Mythalix. 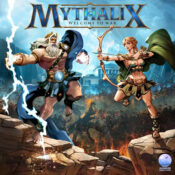 The Independence Incident is the second game in Grand Gamers Guild’s Holiday Hijinks escape-room game series. You’ve been tracking a group calling themselves the Culper Ring who believes there are elaborate clues in American historical sites leading to a great treasure. It’s the 4th of July, and shenanigans are afoot in the City of Brotherly Love. It’s up to you to figure out what happened and let freedom ring!

Santa stumbles across a mystery on Christmas eve…and it will take all of your wits to solve it before he misses the last sleigh out of the North Pole! The Kringle Caper is a card-based escape-room game in Grand Gamers Guild’s Holiday Hijinks line, for one or more yuletide solvers of any age. As a team, you will solve a series of puzzles to unlock the solution to a mystery. Try to finish as quickly as possible for a high score! 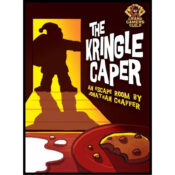 This is the first supplement for Stargrave, the science-fiction wargame from award-winning designer Joseph A. McCullough, introducing new scenarios, soldiers, technology, and aliens to the ravaged galaxy.

At the time of its commission, Imperial Research Station 37 held nearly ten thousand scientist and researchers working on a vast array of biological and chemical projects. Then, six months before the outbreak of the war, Station 37 went dark. There were no distress messages; no escape pods were launched. Only a solitary, repeating broadcast filled the silence. “This station is under quarantine. Do not approach.” When the Endwar came, the station was forgotten, left to drift lifelessly in its empty system. Now, with the war over, and the Free Traders roaming the ruins, the station has been rediscovered. Although the station must clearly be approached with caution, the technology it contains is worth many fortunes. 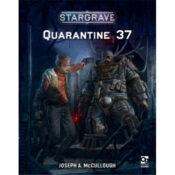 Quarantine 37 is a supplement for Stargrave in which the players lead their team of Free Traders into an abandoned space station, looking for lost technology as well as potentially unique research and experiments. Unfortunately, a few of those “experiments” have escaped and still roam the tight, dark confines of the station. Along with a host of new scenarios, this book also contains new technology, soldiers, aliens, and ship options for the players to upgrade their forces.

Nothing beats waiting for Santa. In this new edition of the Advent Dice Calendar, Q-Workshop has even more treasures for you! Alongside the random-picked die in each slot, you’ll also get a new color theme of Santa Dice—this time with a unique surprise die added to the set. Of course, there’s a special metal die waiting for you the last slot. Prepare for something truly unusual! 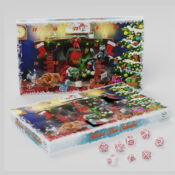 The genesis of the Japanese Dice Set is strongly influenced by Virtues derived from the old traditions of the Samurai, known in the West mainly in an embellished, romantic version. This is completely sufficient to transfer certain elements to our times, creating a vision of the Samurai as a man not only trained in combat but also having adamant willpower, unrelenting self-discipline, and a strong system of values. According to the Bushido Code, these noble warriors were a great example of what every man and woman should strive to be in their lives. 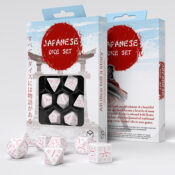 The Cherry Blossom Petals set reflects the spirit of the Bushido Code by focusing on your inner self, striving to get to know yourself the best you can. On the path of self-improvement, one of the most important issues is awareness of our strengths and weaknesses. When we know the source of our reactions, we know the potential effects of leaving them without control. Then we can work on mastering them to such an extent that we do not lose control over our behavior in any situation. Picture this: you’re about to take the most important roll in the adventure, and a critical failure occurs. The thing is, not every GM knows the Kanji characters, so you can just fudge the roll…if you’re calm enough to not give the ruse away. In this scenario, the Cherry Blossom Petals set comes to the rescue! 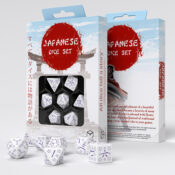 The Blue Star Lotus is a set that embodies the Virtues of Bushido by constantly striving for perfection—to become the best version of yourself, by continuously practicing what requires training. By using these dice, you may get the feeling that you gain more experience with each subsequent roll. And this impression will be absolutely correct, as whenever you perform this specific pattern of movements with your hand, you slowly gain more and more proficiency in it. Of course, we can’t promise you that you’ll get such expertise as to roll a score exactly as planned each time…but your moves will surely acquire grace and confidence over time, worthy of a seasoned player. 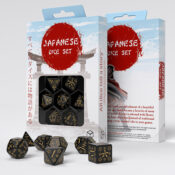 The Deep Night Firefly set represents the Bushido Code by picking up the gauntlet—facing both internal and external challenges. No matter how dark the night is, no matter how deep is the darkness surrounding us—there is always hope for a new dawn. The light in the dark includes both the stars and the fireflies dancing over the clearing; even the smallest flicker of hope is worth sustaining and gives strength to face adversities. The golden color on a black background personifies Courage and Honor, the virtues we all have, which shine with a warm glow whenever we reach in for them in our clashes with fate—whatever form it takes. The Deep Night Firefly is a set that symbolizes your inner strength, thanks to which you will emerge victorious from every adventure!
Previous
Next 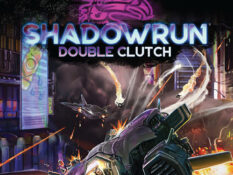 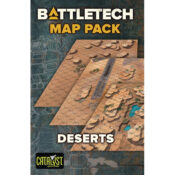 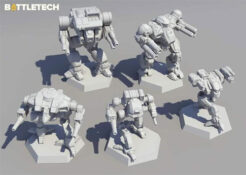 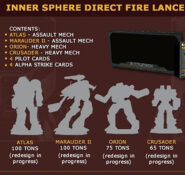 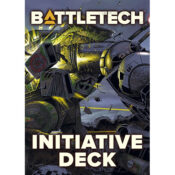