Welcome to Death on the Reik, part two of the revised and updated Director’s Cut of the Enemy Within, one of the most highly regarded roleplaying campaigns ever written! Created by legendary WFRP writer, Graeme Davis, one of the original writers of the campaign, the Director’s Cut provides additional material to create an enhanced experience that maintains all the mood and paranoia of the original. Death on the Reik carries on from where Enemy in Shadows left off, taking your unlikely heroes on a grand adventure up and down the remarkable Reik, the largest river in the Old World and trade route to the heart of the Empire.

Death in the Reik includes a selection of ‘Grognard Boxes’ that add entirely new ways to play through the adventures, ensuring even those who have played the Enemy Within campaign before will find Death on the Reik new and exciting. The Enemy Within is the campaign all roleplaying game enthusiasts should play at least once in their lives, making Death on the Reik an essential purchase for all gamers. 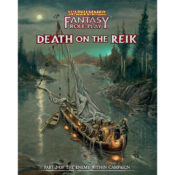 The Death on the Reik Companion is the second of the 5-part series of companion volumes to the Enemy Within campaign. It is packed with supplementary material to not only expand Death on the Reik but also support any WFRP games set on the rivers of the Empire.

The Enemy Within Collector’s Edition contains the revised and updated Director’s Cut of one of the most highly regarded roleplaying campaigns ever written. The beautifully finished, exclusive Collector’s Edition set includes Death on the Reik and the Companion presented in a slipcase featuring the artwork from the standard editions. 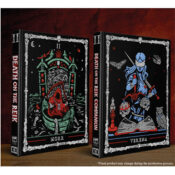 The Warhammer Age of Sigmar: Soulbound Starter Set contains everything you need to begin roleplaying epic adventures in the perilous lands of the Mortal Realms. Whether this is your first ever tabletop roleplaying game or you are an experienced Gamemaster preparing your next campaign, this boxed set is the perfect starting point for anyone interested in Warhammer Age of Sigmar: Soulbound. 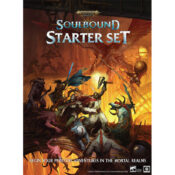 The 2-player version of The Networks is here! It’s everything you love about the original game, streamlined and tweaked as a thrilling duel. Develop shows, sign stars, land ads…and now try to beat your opponent in each time slot, and aim to reach a new goal each season! The Rival Networks includes the “Executives” module for advanced players. 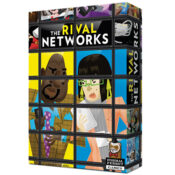 The Fall of the Spire expansion contains six more stories, featuring new mechanisms for combat and town events. Play as one of four new archetypes, or continue your campaign with your existing characters from the Folklore: The Affliction core game and Dark Tales expansion. In this new expansion, the design team at Twin Fire takes us down to the dark streets and up to the rooftops in the towns of Kremel. Then, travel further into the world with new stories, characters, monsters and afflictions. Explore new combat mechanisms that can be used in this new box expansion as well as be added to the core game and Dark Tales expansion. 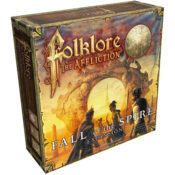 The Folklore Accessory Bundle is an expansion to Folklore that brings together several previous extensions in one package. It includes a World Events Deck, a Recipies & Crafting Deck, 25 Character Record Pads, and 25 Encounter Pads.

This map measures 40.287″ × 23.5″. It is the ideal Oversized Neoprene World Map for all Folklore role playing.

The way before you is treacherous, and there is no end in sight. You’d be a fool to think you could last more than a day on the road without your Equipment Pack. This expansion for Folkore: The Affliction adds a deck of cards to the game that are physical representations of the character specific, text-only items, weapons, and companions that could be acquired via town services and other means.

Are you a modern mastermind detective? The Sherlock Files: Fatal Frontiers includes three new confounding cases for you to solve, all taking place in Tornado Town, a place full of quarrels, cowboys, and cahoots. First, you will delve into the sordid history of a mine rumored to be cursed. Next, you will unearth the truth of who has been desecrating graves in the Tornado Town cemetery. Finally, you will investigate a fatal duel that killed both participants at sunrise.

Decipher clues to determine which are relevant to the case and which are not. Share what you deem relevant with your detective partners. Which theories will you chase? How will you fare compared to the world’s greatest detective? Work together to solve each case and find out!

Arcana of the Ancients: Where the Machines Wait

Experience dangers and treasures unlike any seen before! They call it the Grave of the Machines—an underground mausoleum of the ancients, filled with their wondrous devices and strange magic. Those bold enough to venture into its depths (and return) spin tales of sights and encounters so astonishing they could not possibly be boasts or mere fiction. And they say its riches are as vast and unfathomable as its depths. 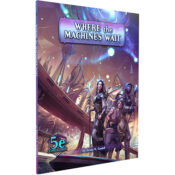 Venture into the Grave of the Machines, if you dare, for adventure unlike any you’ll find in typical ruins or dungeons. Where the Machines Wait is a mega-adventure for 5e for characters of roughly 5th level. It can be played as a series of short ventures into the Grave of the Machines, easily placed between other adventures in your campaign. Its deeper plotline can be introduced at any time—or it can remain in the background as you simply crawl the dungeons.

Inspired by The Witcher franchise, these dice sets are dedicated to Dandelion, Geralt, and Yennefer. Each set contains 8 pieces: 7 polyhedral dice and a metal coin, featuring a character depiction, which acts as a D2. The highest-value faces and coin display a symbol related to the character. 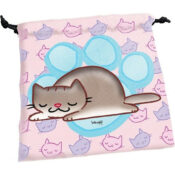