Boss Fight is a multiplayer game format that is being introduced to the Final Fantasy TCG for the first time. Played with 3 to 4 (1 vs. 2 or 1 vs. 3) people, 2 or 3 players party up as the “Heroes” to discuss strategies and cooperate with each other to challenge the “Boss,” who holds a powerful “Boss Deck.” Until now, this format was only offered during FF TCG events, against official staff, but now you can enjoy these battles with other players, without the need of official staff. 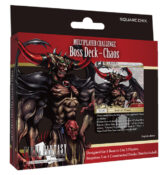 Multiplayer Challenge: Boss Deck — Chaos is a preconstructed 80-card deck to be played as the “boss deck” during a Boss Fight. There are many cards included in the deck, such as The Emperor, or Cloud of Darkness—boss characters who appeared throughout the Final Fantasy series—with their text updated to be more powerful, to be used specifically for Boss Fights.

Now, the Boss Fight-specific cards have a different frame from those typically included in a booster pack, and so you will not be able to use them in standard Constructed format matches, but these are highly collectible.

Each deck contains 67 Boss Fight-specific cards and 33 reprinted cards from previous booster packs. Cards that are specific to the Boss Fight cannot be used in regular Constructed format matches. All of the reprinted cards can be used in regular Constructed format matches. You will not be able to play with just this product. In addition to this product, you will need 3 (or 2) 50-card constructed decks to play. Learn more in the official “So. Who’s the Boss?” article.

MTG Phyrexia: All Will Be One Accessories — Ultra•PRO
January 27, 2023