Find links, and create connections! In Match 5, all you need to do is find a common link between two words or groups of words. You have three minutes to use your imagination to come up with links for each of the ten dice combinations.

Progress deeper and deeper, avoiding disturbing the sharks to be the first one to grab a beautiful gem thrown at the bottom of the sea. Pay attention to your oxygen—you need to use it carefully and at the right time to keep the strength to reach the treasure. Keep your eyes open, as some kind animals might help you to dive deeper.

Dive is a game using the transparency of cards to play a unique experience. Your sense of observation will be at the heart of the game, but the strategy may make the difference. 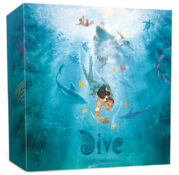 Thirsty for adventure and fame, a few intrepid adventurers plunge into an underground maze. Just as they get their hands on the treasure, a powerful sorcerer emerges from his torpor and begins to hunt them down. The only chance the adventurers have for survival is to flee toward the exit while thwarting the terrible spells he casts upon them.

Rush Out! is a game of speed, in which one player plays the sorcerer, trying to retrieve his treasure from the other players, the heroes. The first team to empty their deck of cards wins the game. 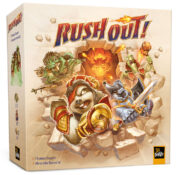 Rob a shopping mall before time runs out! After being stripped of all their possessions, a mage, a barbarian, an elf, and a dwarf are forced to go rob the local Magic Maze shopping mall for all the necessary equipment they need for their next adventure. They agree to pull of their heists simultaneously and then dash to the exits in order to evade the guards who eyed their arrival suspiciously. 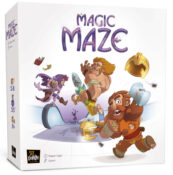 Help cure the king! The king was accidentally turned into a frog, so gather your friends, stride across the forest, and find the correct ingredients to prepare a potion that will cure him.

Magic Maze Kids is a cooperative game that makes the original mechanisms of Magic Maze accessible to young players. Everyone controls all of the heroes, but only in one direction! 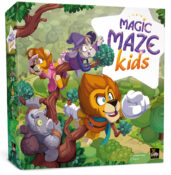 At the crossroads of Sudoku and lotto, Lucky Numbers is a game in which you can make your own luck! Each player tries to be the first to completely fill their garden with clovers. But they must check that, at any time, the numbers are arranged in ascending order in every row and column from left to right and from top to bottom. 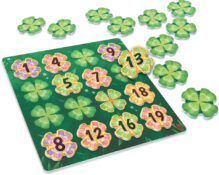 Gather the most visitors and win! Dragons are back into our world, and they are in vogue! As the proud owner of a group of islands where dragons nest, you’ll have to manage both the tourists’ expectations and the dragons’ appetite…

Dragon Parks is a drafting game that makes use of transparent cards. Select a new card each turn to put on one of your three islands, adding or covering dragons in this park as you do. Some dragons hate to be covered by others and will snap back at you, and if you manage to hatch an egg by covering it, it will attract new visitors! 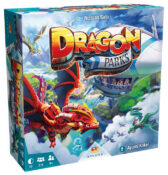 Railroad Ink Challenge has everything you love from the original Railroad Ink games and a lot more, with an all-new focus on player interaction. Roll the dice, and draw the routes to connect the exits around your board. Expand your network with railways, highways, and stations to collect points, but you will be penalized for any open connections, so plan carefully! 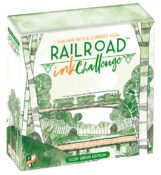 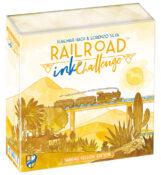 With the Lush Green edition, you’ll roll the special forest dice to create placid forest landscape, or use the trail dice to weave scenic mountain paths and build a beautiful arboreal paradise. In the Shining Yellow edition, roll the special cactus dice and use oases to protect your cacti from the arid desert climate, or build the longest canyon possible with the Canyon expansion, but be careful not to sink the ground!

Can you guess the animal? Similo is a cooperative deduction game. Each version comes with a deck of 30 cards, beautifully illustrated by Naïade, showing the portrait, name, and a brief description of a series of characters with a common theme. In Similo: Animals and Similo: Wild Animals, you will play with the wildlife from the animal world.

The Clue Giver must lead the Guessers to identify one Secret Character by playing other character cards from their hand as clues, stating whether they are similar to or different from the Secret Character.

You can also mix and match different versions by using one deck for the characters and the other for the Clues… Will you guess which animal has something in common with Ermes, Artemis, and Apollo from Similo: Myths?

Vampire: The Masquerade — Vendetta is an asymmetrical competitive card game of strategy, bluff, and deduction, designed by renowned game designer Charlie Cleveland (Subnautica) and Bruno Faidutti (Citadels). Three to five players will take control of one of the scheming vampires and fight at several locations to win the support of influential allies and ultimately challenge the throne of Chicago. 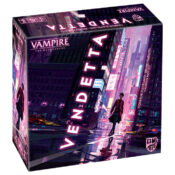 This time, you’ll be going into the deepest horror. Monster Slaughter: Underground is the first expansion for Monster Slaughter. Terror sometimes makes you crazy… After splitting up into small groups, stumbling blindly through poorly lit rooms, now the guests think they’re safe in the basement! Will it be their salvation? Or their tomb? 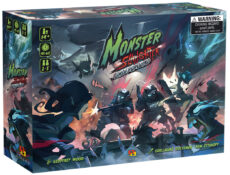 It’s time to welcome new species in your park! Draftosaurus: Aerial Show will showcase the mighty pterodactyls in their aviary, and Draftosaurus: Marina will feature plesiosaurs that will invade your river. Discover new strategies to win in a game more jurassic than ever!