The D&D Icons of the Realms: Adult Blue Dragon Premium Figure is an excellent addition to your miniatures collection or display shelf. Sculpted with highly detailed features and using premium paints, this blue dragon is a great foe for any adventure! 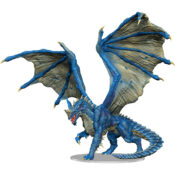 Vain and territorial, blue dragons soar through the skies over deserts, preying on caravans and plundering herds and settlements in the verdant lands beyond the desert’s reach. These dragons can also be found in dry steppes, searing badlands, and rocky coasts. They guard their territories against all potential competitors, especially brass dragons.

A blue dragon is recognized by its dramatic frilled ears and the massive ridged horn atop its blunt head. Rows of spikes extend back from its nostrils to line its brow, and they cluster on its jutting lower jaw.

A blue dragon’s scales vary in color from an iridescent azure to a deep indigo, polished to a glossy finish by the desert sands. As the dragon ages, its scales become thicker and harder, and its hide hums and crackles with static electricity. These effects intensify when the dragon is angry or about to attack, giving off an odor of ozone and dusty air.

Resident Evil 3: The Board Game & The City of Ruin Expansion — Steamforged Games
September 2, 2021